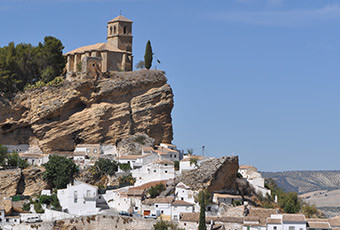 The magazine describes how Montefrío’s breathtaking views are a surprise from every entry point and how the three monuments, especially the Iglesia de la Villa (located on the top of the rock) blend in with the landscape, providing a photo opportunity at every angle.

Earlier this month, the Ayuntamiento de Montefrío paid tribute to Paco Adamuz dedicating one of the many famous miradors (viewpoints) that capsulate the views noted by National Geographic magazine, to his memory.

Paco took over 35,000 photos of Montefrío and played a pivotal role in helping showcase Montefrío across Spain with at least 200 of his images becoming studio backdrops and idents for various TV channels in, including El Tiempo de Televisión Española, Antena 3 and Canal Sur.

We got to know Paco soon after we arrived in Montefrío and shared his love of taking photos of the town and spectacular landscape, although we’ve got someway to go to reach the amount of photos he took.

Dedicating the ‘Mirador de las Peñas’, one of Paco Adamuz’s favourite view points of Montefrío, to his memory is a very fitting tribute to the man who was well-known for always having a camera in hand, wherever he was in town. We look forward to taking many more photos by this new installation that resembles a camera and remembering Paco.